A short historical glance and the start and development of Jadrolinija 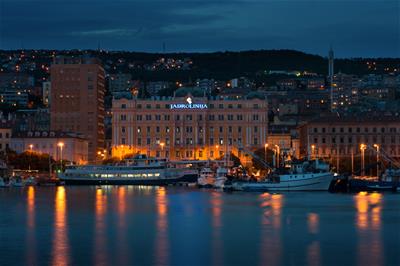 Jadrolinija is one of Croatia's oldest shipping transport companies. Legally, Jadrolinija was established on 20 January  1947 in Rijeka as the company  Jadranska linijska plovidba, a  successor to Jadranska plovidba   d.d., part of Dubrovačka plovidba   and the remainder of Zetska   plovidba. Prior to the war,  Jadranska plovidba also arose   through the merger of several   small coastal shipping companies   after the fall of the Austro-Hungarian Empire, and those previous shipping companies arose from other mergers, and so on, all the way back to 1872.

It was in that year at the initiative of the Senj shipping company that the steamboat Hrvat was ordered from the Stabilimento Tecnico in Rijeka (at that time a torpedo factory, later Torpedo). The ship was launched in the sea on 13 July that same year, and already on 4 September made its trial voyage from Rijeka to Senj. Immediately afterwards, the ship Hrvat established a regular sailing line between Senj and Rijeka, stopping in the ports at Novi, Selce, Crikvenica, Voz, Kraljevica and Bakar.
Even prior to 1872, there were attempts to organise transport and excursion shipping (Lloyd's rail and excursions - Arciduco Lodovico 1837 railway Trieste – Dubrovnik – Kotor, with stops in Rijeka and the railway for Rijeka, excursions in Bakar and Krk in 1845 and 1846).

At the end of the 19th century, several Croatian ship owners merged into a new shipping company, in which the shareholders were S. Kopajtić, A Štrk, M. Polić, the Bakarčić brothers and other ship owners from Kostrena, Draga, Sušak and Istra. On 11 September 1899, they established the Austro-Croatian joint stock company, which they called Ungaro-Croata. This was the first modern shipping company,
virtually entirely Croatian owned and which dealt with the transport of goods and passengers along the entire Adriatic and all the seas of the world. Ungaro-Croata was a very successful company, with a positive balance right up until the end of its existence in 1919.

With the breakdown of the Austro-Hungarian Empire and after years of negotiations, all the ship owners of various companies were divided and from this fleet, new shipping companies were formed in the newly established country. As such, the companies Jadranska plovidba (former Ungaro-Croata), Dalmatija, Austro-Croatian Steamship company, Coastal Steamshipping (Dubrovnik), Croatian Steamship company (Senj) and Oceanija from Trieste were merged into the company Jadranska plovidba d.d. Sušak in 1922.

Jadranska plovidba d.d. had some 70 ships for the transport of passengers and goods on Adriatic lines, and lines for Albania, Greece and Levant.

During World War II, some of the smaller ships were destroyed, and in 1947, the remaining ships were managed by the Direction of marine navigation, seated in Split, until 20 January 1947 when a new shipping company was established in Rijeka –Jadranska linijska plovidba. The new company began its activities with old ships, repaired the damaged and sunken ships, and only in 1952 did it order and receive new ships from Croatian shipyards. The first was delivered by the shipyard in Pula, later from Split, etc.

When it was established, the company had 41 ships under its command, but by the end of its first year had only 29 small coastal fleet ships. The age structure of those ships was very unfavourable. The newest ships at that time were Bakar, Rab and Šipan, constructed in 1931 and Kotor in 1938. The remaining ships were still from the Austro-Hungarian period, built between 1891(Trogir) and 1914 (Kupari).

For this reason, the continuity of Jadrolinija can be observed and analysed only in the context of the development of coastal shipping lines, from 1872 to the present day.
In the period from 1952 to 1960, several new ships were ordered and old ships overhauled. In 1958, Jadrolinija had a total of 65 ships, mostly classic ships, which was partly a consequence of the traditional conception regarding the type of ships and the organised shipping line network.
In the early 1960s, ferry transport was introduced. The first ferry, Bodulka, was put into operation on 1 January 1963, and this opened a new chapter in the history of Jadrolinija, as the old ships were replaced with new, modern means of transport, and international lines were soon established.
Jadrolinija was particularly significant during the Homeland War. In the war years 1991 and 1992, Jadrolinija and its brave crew transported about 50,000 people from the occupied territories in Croatia and Bosnia-Herzegovina.

The Holy Father on Judita